Aladdin usually is quite a dragon to lunge and generally at least once takes me sand skiing behind him.
Since being at the new yard I haven’t really lunged a great deal as he has been getting ridden every day. However this week my Mum has been in hospital so I haven’t been able to stay late riding at the yard meaning I have only had time for a sneaky lunge.

It has also meant we have been working in the dark most evenings which I have quite enjoyed as I find it relaxing and I love seeing Aladdin alert and scouting out his nighttime surroundings.

He has been near enough perfect this week to work on the lunge, I don’t know whether Patches can sense I am down in the dumps or he is just really benefiting from daily work, perhaps a hint of both.
A killer rabbit even launched from the school fence one evening whilst mid floaty trot which sent Aladdin into sudden panic, however rather than bolting down the school and taking me with him he spooked and trotted in towards me and stood snorting until I reassured him.

His canter on the lunge is 110% better and more balanced than it used to be- we are still a tad cardboard on the right rein but the amount he is coming on is ridiculous. No bucks were necessary as the balance was there to stop him getting his legs in a muddle and chucking his teddies.
I cannot express how happy I am with his progress, I had forgotten how important it can be to sometimes have a quiet lunge as I believe it has worked wonders for his manners and our bond on the ground.

Final note: What the heck is with the lunge whip weighing ten tonne by the time you are done in a soggy sand school- bingo wing buster or what?! 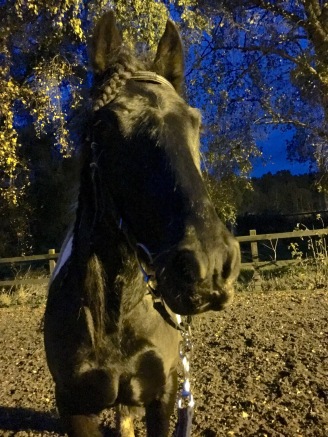