Cob Lover or Convert?
I’ve always been fascinated by cobs from a young age – as a teen I’d spend my days after school visiting the local field full of traditional cobs, dreaming that one day I’d own one of these hairy beauties. Cue to 17 and in college, I finally got my first pony Cassie; a 14hh section D mare who, lovely as she was, definitely gave me a crash course in horse ownership and riding!  I got her as a 10 year old unbacked broodmare who definitely got a new lease on life being ridden…..there was not a thing that mare wouldn’t jump.Cue to me being not far off 30 now (*cough* 21 again!), I’ve now got two cobby beauties, and little Cass is still going strong teaching a friend’s children the ropes!

So I shall introduce my two boys
SD Sparks.
He was bred at SD Farms in 2010 and was a lovely surprise to come home with….7 years ago this month to be exact. This is our 7th year ‘own-iversary’ and we’ve definitely had our best year by far. Sparks has done literally everything and is another one backed by myself. He has done driving championship shows, hunter trial national championships, show-jumping championships, affiliated dressage, trec, carnivals, pony camps, riding school, swimming, hunting, etc. You name it he’s done it! In the past year however, we have done less ‘traditional’ activities and ventured into a much more ‘interesting’ career – historical riding.

This year was Spark’s first year at jousting and historical displays……And.He.Was.Awesome!

Our first debut was being a bandit in the St George’s pageant where he got to rampage villagers, have a fight with St George and meet a fire breathing dragon.

His first joust was at Beeston Castle in May, being on top of a hill amidst a rather strong storm, quite a way to start his debut.

His final joust this year was at Old Sarum in August where he was an absolute pro and got quite a few lance breaks and did a splendid sword melee. He also was used in a ‘training of the war horse’ demonstration in between shows, demonstrating some classical movements such as pirouettes, traver and half pass, needed to be nimble and manoeuvrable in a fight.

At home, we have been practising our classical schooling which he has proved quite keen to learn.  Basing our training on historic works such as William Cavendish’s methods and the pillar system, he has the start of pessades, levades and Spanish walk forming. Piaffe is next on our list.

In between this all on a day to day basis, he has gone on beach holidays and spent his summer blackberry and apple picking as well.

The final end to our season will be doing the battle of Hastings in October.

All in all, this little stallion really is above and beyond the ultimate ‘all-rounder’.

Kissimmee Solo
Not to be left out either, is my newest horse ‘Kissimmee Solo’. He was bred at the Kissimmee Stud in 2014 and I purchased him as a lightly handled youngster a year ago from a local family who loved him very much and wanted him to go to a nice home and be bought on for a job. He has been a slow starter, but is a lovely lad and showing some really smart potential. We’ve taken him slowly and started him in a classical manner and just want to give him the best start in life. He’s an old pro long lining and already has lateral work starting. He has just been backed this week and all photos are of him on the 1st 2nd and 3rdride of his life. He has been incredibly quiet and has a willingness to work and do new things. He’s a bit taller standing at nearly 15hh and being a welsh D is a lighter build than Sparks. I’m not totally decided on what to aim him for – at the moment if he takes to ridden life well and keeps up his willing attitude, I’d like him to follow suit and do everything and be able to do historic stuff when he’s older also. We’re currently just taking each day at a time however and keeping a very laid back view on life!

So that’s my two slightly ‘different’ cobbies. Definitely have a very varied and exciting life! Historic Equitation, the historic yard we are based at, definitely has made our life much more interesting and have taught my horses so much this year. Recreating the past on a very native breed! 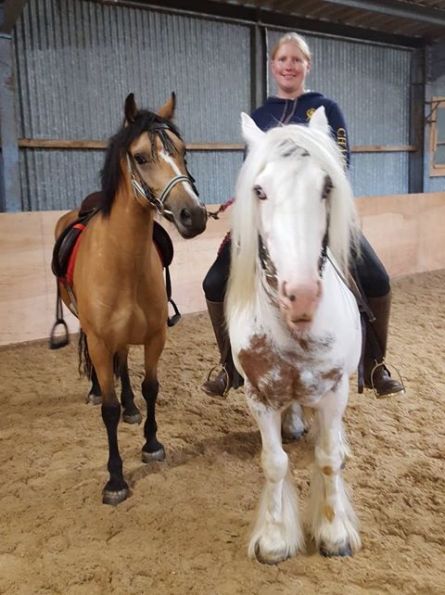 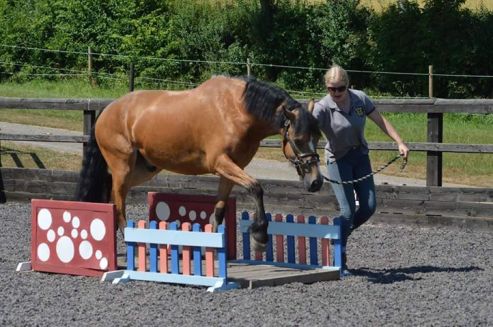 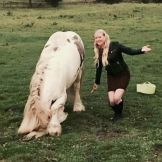 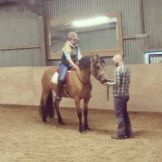