So since our last jump lesson we have been out of action. The day of our lesson he wasn’t picking his hind left up and when he did decided to lift it hew soon snatched it away from me. I hadn’t ridden him the previous day  due to work and the day before he was fine. Naturally I went into panic mode and got my Aunt to come and have a look as I didn’t want to do the lesson if he was sore. She suggested his skin might be sore and tight where the fillet string had gotten muddy the other day and rubbed. I was rather hesitant to ride him just in case, but my Aunt insisted if he didn’t look or feel right I could hop right off.
Amazingly he warmed up well and felt like such a keen bean, and the lesson went like a dream (you can read all about it in our previous post), so I went with the sore skin theory.
Being a bit of a drama Queen I booked the Physio the next day as he was due a check up anyway and his leg snatching was still playing over in my head.

When Jess came she did all the assessments such as backing up and turning on the spot and to us all he looked spot on. He completely loved Jess and was thoroughly enjoying his massage. The harder Jess worked into him the harder he pushed back. His eyes were soft and relaxed. He had a couple of tight spots but nothing too drastic.

Then came the leg stretches and out came my panic again. He pulled his leg away from Jess and spun away from us. We put him in the stable but he would not let us near his leg. We were all fairly baffled and shocked after how calm he had been.

We were prescribed a week of walk work and extra snuggles (with one on the lead roll- Sorry Ryan). I am pretty sure it was the longest week ever, but eventually Jess was back at the yard ready to asses the leg situation. I lunged him in the small indoor whilst Jess watched and took a few slow motion videos. It showed up that he was very mildly lame and taking a short stride in between strides in trot and canter.
There wasn’t any heat or swelling so Jess gave us the mission of a daily lunge for two weeks until she came back. This was going to either work him through whatever has happened or make him worse. The whole idea being if it does get worse he can have a proper scan and assessment.

Today is the day Jess is back so I have all fingers and toes crossed we get the all clear to get back riding. Aladdin has been on the lunge every day and it’s safe to say he has found his lunge legs. He has been super giddy and chomping at the bit to go. To me he looks in fantastic shape and incredibly balanced, but that is why I am not the Physio.. 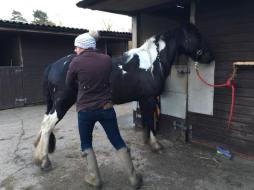