A little late writing this one but the other day we hired the jump arena with our partners in crime Riley & Tinks (nothing new there). We were doing our usual taking it in turns to do Riley’s made up courses.
Aladdin felt fairly ‘on it’ and ready to go, he felt as strong as an ox but I had control, well a little bit haha!

There were a few other jumps set up slightly bigger than we normally do but I thought I would take advantage of Aladdins cockiness and point us at a couple. He handled a red jump with castle fillers amazingly and stayed in a confident bouncy canter to the white and black filler fence a few strides after.
Usually I don’t attempt fillers unless on a lesson as in my head that makes them ‘proper’ jumps..
After jumping the red fence a couple of times and over-jumping it we headed for a little but scary fence. It was the first time I had seen the scissor fence in the arena but I can understand why he was shying away from it. The scissors were fairly solid and had a yellow pole balanced on top. Of course we took the yellow pole off to start with just to test the waters. As I anticipated he hopped over it like a Kangaroo on an E number overdose just to make sure he did not touch the spooky scissors in any way shape or form.
After watching the video back and seeing how much room he gave it I asked Adele to put the pole back on top. Instantly it made the semi scary jump a super scary jump. I asked Adele if it looked too big and she didn’t reply as such more of a laugh.

At that I cantered off with some sort of weird brave/idiotic pants on I shouted to Adele, “please could you video this in case I fall off”. I am not sure if my eyes were open or if I was breathing but I know my brain was not fully functioning! We were over it!! It felt amazing, I could have cried!

My whole life I have watched other riders and wondered what it must feel like to go over a jump that actually looks like a ‘jump’. When we competed at 65 I was almost certain I felt a breeze in my hair that had escaped from my hat at least once but this just felt like something different- something I want more of.

For now we shall continue to compete in smaller classes as after landing the 90 there was no way I could have pushed Aladdin on to another jump of the same height- he felt just as shell shocked and leg-pickled as me.
One day… 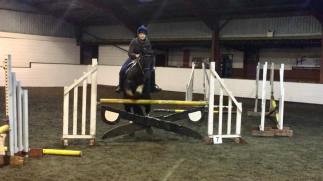 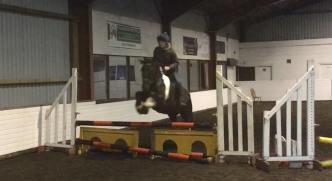