Emily and Brian were unable to make it last Friday so after a bit of last minute panicking we hired our Top grooms Adele and Riley. It was a fab atmosphere when i got to the yard and started mucking out as Riley was taking Tinkerbelle for their first clear round.

As per usual I entered us for the 45cm and 55cm as I am sticking to the fact we work better using a smaller class for a warm up rather than attempting anything major in the warm up which usually consists of ten trillion zoomie ponies.

Aladdin went in and felt excellent and was more than willing to canter before the first fence and round the turns. One slight rider ‘brain fart’ moment where I pulled out before fence four and circled him before actually going over it. For some reason in my head i was looking for fence three as I only recalled going over two fences- what a muppet! You would think the fact I watched Riley go round the course three times would have made the fences sink in to my pea brain. I think I am going to blame the fact I must have been over thinking the fences as generally I am concentrating on keeping Aladdin going forward whereas tonight he felt great so I had time to think about other things and obviously I had also forgotten how to count past two.

The warm up ring was interesting after the class as it appeared I had left my brakes in the jump arena and Sir giddy pants wouldn’t stop prancing and bouncing round the track- obviously he was excited for the next class..

In the second class Aladdin was equally as fabulous and our only drop to trot was round the long corner to the blue wavy (horse eating) filler fence, when I realised it was the infamous filler fence I glued my leg to him and whispered in his furry ears that ‘he had this’, and we were well away!

After tonight I definitely feel we are ready to move up after a class once the Winter League is over. Aladdins legs have stopped getting in a pickle and he feels so confident and willing. We have taken it slow and steady without pushing ourselves up a class too early and the results are finally showing. 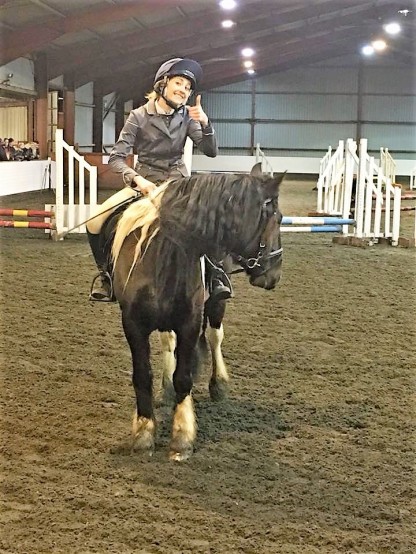 4 thoughts on “Winter League (It Sure Comes Around Quick)”