After last time with the show getting cancelled due to the weather and me spending the whole week convinced I was going to get squished in the cross country ring I was actually rather looking forward to this one.
For some bizarre reason my nerves had vanished? Not sure why but they have and it’s scarily good!

Katy very kindly said I could wear her body protector and would also be there to shout me round as her and Flo are Cross Country Goddesses! She also helped me groom the scruff ball beforehand as he had quite clearly being having a poo party. She  even helped me warm up, it’s great to have such a supportive yard family!
I decided to go up an extra hole on my stirrups from when we are jumping as advised by a couple of people.

Once on board (and he actually let me straight on for once) we headed straight into the warm up and were luckily the only horse in there. Aladdin was feeling rather giddy so I attempted a calm warm up with a tiny cross pole on each rein a couple of times.
Whilst it was still quiet we slipped in before there were anymore spectators. He felt rather cock-sure in the showjumping arena and ready to go and to be fair that he did, the only time he dropped his canter was when he realised the corner of the arena which normally has the cannibal chair in it was opened up to outside. After the last show jump I brought him back to trot ready to exit the open arena through to the outdoor into the cross country jumps. Eyes on stalks and tippy toes were happening along with some wiggling as we approached the first rustic double. Wahoo we were over it, not phased by the farm animal fillers at all once he had a bit of encouragement (and a growl).
The next jump was the ‘Beehive’ and our first proper solid, to top things off it was also skinny and decorated with conifers. My thoughts were- Holy crap we’re doing it, Aladdins on the other hand were- NOPE NOPE NOPE with an extra dose of NOPE! After a few run outs and a near run over of Katy we did it pretty much from stand still. I pulled him up to it, stopped him and told him to stop being such an antsy drama Queen. He thought about it and then pawed at it which still keeps making me chuckle now and then jumped it. We did manage to take the jump number with us and get it attached to our reins in a very non stylish manner.
Another rustic double came after this which again were not a problem. However THE fence followed these. This was the only jump that spooked me a bit when I walked the course the other weekend. I don’t know what gave me the jitters most about this fence but I just wasn’t a fan and nor was Aladdin. After a refusal I turned him straight back to the other side of it in trot and growled “bloody hell just look at it” and voila we jumped it, even if we did jump it the wrong way round…
After this we did manage to do it correctly with a lack of brakes upon landing.

The second ‘clear round’ was near enough identical to the first one apart from we jumped the ‘beehive’ from moving and jumped the gate the correct way round.

Wobbly baby legs all round!!
But we did it!!! 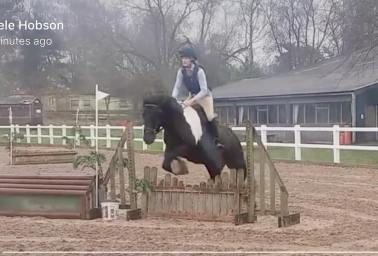 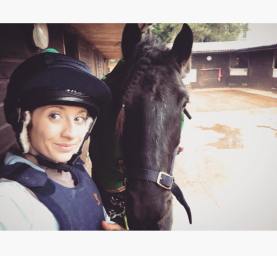