So generally the show ends up running fairly late and I can pop home to get changed etc but last Friday work was all a bit mad and I was digger washing frantically in the dark (glamorous job I know). Luckily I had remembered to pack my shows clothes into Maximus the MG, my wardrobe on wheels so I could get changed at my Grandmas.
In my head I had decided to do the 45 beforehand as a warm up again as it seemed to work wonders for his confidence over the fences a fortnight ago. However by the time I got to the yard the class had begun. And at that so did my flitting about and panicking!
We managed to get tacked up and entered into both classes, I jogged the course with complete brain blur and realised I was just going to have to wing it.
Generally speaking we trot the majority of this class and use it as a warm up as to avoid the killer ponies in the warm up arena and due to the fact the course hadn’t really sank into my brain I needed to take it steady to keep an eye out for the next fence.
Aladdin however had a completely different idea and decided  we would canter round, his confidence instilled extra ‘Oomph’ into me and we got round clear in a confident canter- without getting lost!!

So into the 55 we went with me feeling optimistic…. Within five seconds my optimism slipped out the saddle as Aladdin had gone dead to my leg and was riding like he had never attempted a course before. Inappropriate spooks and an attempted refusal (fortunately the jumps are small enough to push him over) took me rather my surprise considering how he felt in the last class.

After our steady round was over I took him back into the warm up where the jumps were now a little bigger but equipped with the schooling whip I had spent all week trying to get him used to. The second I tickled his bum with it we were off, and I mean off! He was cantering the arena head down with occasional grunts and I had no brakes. When he calmed we jumped the warm up fences a treat.
So stupidly I had spent the week trying to get him not petrified of the schooling whip in preparation for some dressage schooling and had ridden without my baby spurs therefore presuming when I put my spurs back on he would listen to them as he always had done. And stupidly I was wrong. Looks like I am going to have to alternate between the schooling whip and spurs until he comes round to the idea of a normal crop which we will hopefully be able to use in our jumping.
During the week I have barely even tickled him with it more just rubbed it over his bum etc he must just ‘know’ when it’s in my hand. 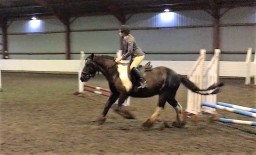 2 thoughts on “A Rushed Winter League”