Today we were going to be riding in the big indoor school with Riley on his pony Tinkerbelle. Adele was wanting to get Tink used to schooling around other horses so we offered to be the Guinea Pigs as we always have a super laugh riding with them.

Adele had set some lovely baby jumps up for us to go over in turns.
We started doing just one then two then linking it to a small course. Tink was being a complete Saint and Riley rode her round like a pro. Patches thought he was a bull quite obviously as he was thundering down the arena and bombed ‘through’ a couple of fences.
I jokingly shouted out after doing the double that I may as well jump the next fence on the course for a ‘You’ve Been Framed’ moment as it was slightly bigger but had the scary horse eating fillers under it and carried on riding as we laughed the idea off.
However for some stupid reason I had accidentally put my brave pants on and after doing the double once more I put my leg on and pointed us at the freaky fillers chuckling away, I even squealed and giggled over the fence. We made it over!!! Before I could celebrate and even had chance to stop laughing Aladdin cacked his pants and chucked his teddies. All I remember seeing was Adele looking rather shocked and Patches with his beady eye spooking at his midair mum alongside him.
Somehow I landed on my feet and even remembered to bend my knees (Health & Safety in the school) and got spun round on my heels. Due to the fact I was still hanging onto the reins im pretty sure I got some form of Whiplash as Aladdin whisked me off my feet.
Must remember to bow next time so it looks like I was performing some sort of trick. I think all of my joints were slightly crumpled but I could not stop laughing, in fact I ended up bent over double. Poor Patches pony even gave me a nudge to snap me out of it. Adele had also caught on laughing by this point as Riley complimented me on our Superman impression.
Whilst waiting for my steam to return we watched Riley do his last round before I decided we would take on the deathly fillers again as to try and end on a good note. Luckily this time we went over, we may have taken a pole with us but my bum stayed firmly on the saddle!! 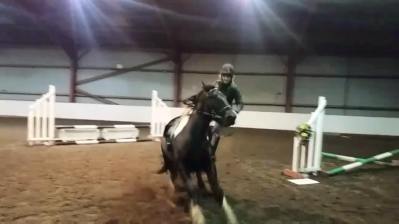 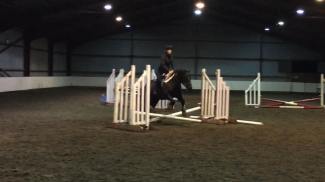 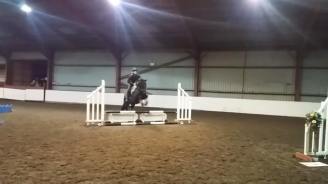 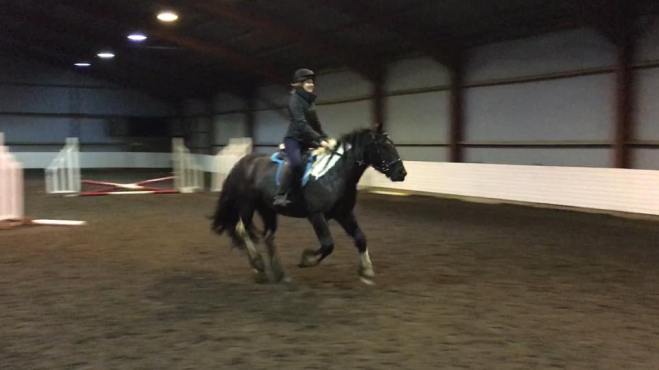