I have officially lost track of the days now- I am guessing it must be around Day 40 but due to the fact I have been delayed in posting I have completely and utterly fried my brain.

So anyway my Aunt was at the yard again and doing a full days teaching, so as per usual I spent the entire day at work getting myself in a flap about riding in front of her. I still have not sussed why I get in such a pickle over our lessons, it must be the fact she has done so well in the equestrian world and I aspire to ride one day at a similar level. Everybody thinks it should be easier for me as she’s family but it sends me into meltdown and I spend half the lesson forgetting how to ride and just wanting my Aunt to think I am ‘getting there’.

Prior to our lesson in the warm-up I realised my stirrups were on wonky so perched on the saddle to adjust them, usually when I take my feet out Aladdin stays perfectly still however this time he decided to trot off and over some poles. I was not particularly wanting to partake in no stirrup November today but I was impressed with Patches eagerness- less so impressed with lack of brakes.

After our refusals at the doubles the other week I had already asked if we could work on them in our lesson. The wings were in place for the double and we laid canter poles on the ground were the fences would normally be with ground poles in between. Aladdin cantered through nicely on both reins and I relaxed a little.
A small cross pole was put to replace the last ground pole between the wings, and we cantered this both ways also, once with the poles before the cross and once with them after. We made the cross a straight and did this until there was a ‘proper’ double with small jumps between each set of wings. Before doing the double each time now we did two other jumps to ensure we had a ‘quality’ canter.
The first attempt- we near enough walked over the second part (need to keep my leg on)
Next couple of attempts- Had a few Thelwell moments and got left behind (shoulders back and sit straighter at the first part)
Last few attempts- Almost nailed it!!! With a complementary woohoo on the video from my Aunt!
At last I feel my confidence has really bounced back as when asked if we would like to do the jumps again I did not even hesitate whereas before I would have most likely said no and regretted it later.

Really loved our lesson today and felt like we learnt a lot! 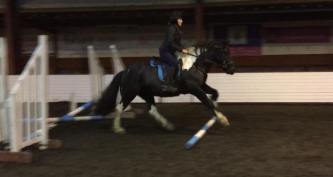