Woke up really looking forward to today as my fabulous friend Laura was bringing her beautiful mare Honey to the yard so we could have a ride together.
They were due to roll up at around half ten so I went down at eight to muck out etc, Princess Patches was not impressed about his friends getting turned out and him having to stay in but there was no way I would be able to catch him an hour later in the ten acre.
Inbetween yard jobs I nipped home for a bite to eat and managed to rustle up a full English for myself and Ry before rushing back off (the perks of only being five minutes away from Aladdin).
Aladdin had quite clearly spent the time in which I left him alone pulling down his neat little bed piles and dragging them around. He also wasn’t very impressed when I tied him up to give him one last brush over as he was determined to rear himself loose.

Laura and I were planning on going for a ‘plod’ down the road however she messaged to let me know that Honey was a tinker to catch and feeling a bit fresh also, and due to the fact there was a BSJA show going on there were lorries coming through constantly and everywhere seemed to be a bit exciting for our Cow ponies.

We opted to ride around in the big outdoor where there were two ‘us’ sized warm-up jumps. Both horses calmed down and were super and did some rather quirky matching spooks. The two horses were so naughtily in-tune with each other, walking sideways away from killer children. Neither of us could believe it when they actually started ‘tripping’ over after each other and both just sat chuckling through it.
Trotting alongside each other chatting away was absolutely fabulous, and even better when one of the racing cows decided they would try stick in a tranter to canter to get in front. 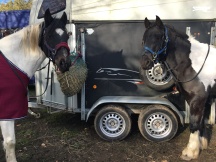